...too many?  Maybe, but I'm sure glad I did 18 because trying to get the finished sewing perfect has been a serious challenge. 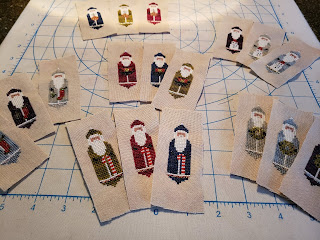 It all seems pretty straight forward until I sew up the first one. 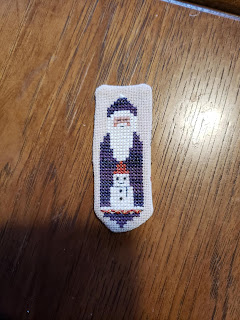 To say I was disappointed in the end result of the first Santa is an understatement.  So I used a ruler and tried again doing it a little differently. 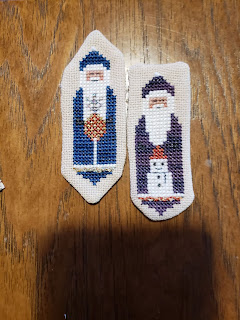 Wonky at best.  Feel free to laugh because I sure did.  It was at this point I realized I had not used fusible interfacing on the back and the evenweave is so floppy it goes where it wants and does what it wants.

Interfacing in place, I try using a ruler to get things right and it's almost there! 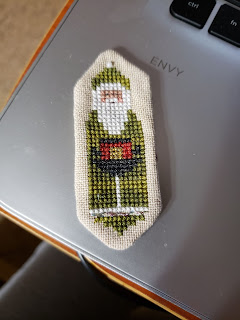 Slightly off.  But MUCH better than it was.  By the time I managed to get that one done I was tired and needed a sit down.  I ended up doing some crochet that I cannot share now because it's a gift but I finished that project quickly and happily.

Here is what I have to do to try for a more perfect seam. 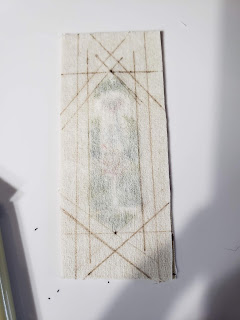 After sewing it up, it is better but still not perfect.  So I'm thinking these will be "rustic"...let's have a giggle about that for a minute. 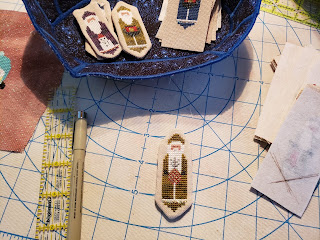 Not my best ornament making, but the stitching is lovely!  Once I get cording on the two that are pretty "okay" I'll hopefully be more satisfied. And then I tried to stuff the dang thing and that turned into a chore.  It is obvious I shouldn't have made them so small.  Maybe an extra inch of fabric all the way around would have been better.  LEARN FROM MY MISTAKES!

Cording has been made and sewing it on began.  I'm not going to say the cording fixed anything or made it so much better, but it's not as bad as I feared.  This ornament will NOT be gifted to anyone this year, it was the practice run on stuffing and cording. 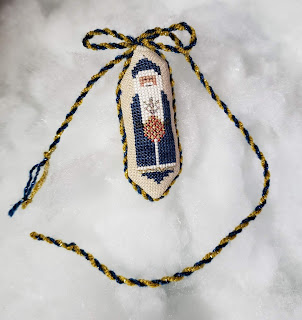 Still wonky, but more presentable.  I'm supposed to send my ornaments today but it looks like that is not going to happen.

I'm at the point now that maybe instead of pointing the ends I just sew a rectangle and call it good.  I'll try that and see what happens.  Update on this progress tomorrow!  If you have suggestions, by all means share!  I have a bunch of these guys stitched as you know so testing ideas is always an option.