When I Did Start Stitching...

...things started happening in a wonderful way.  So now I can show you all of the wonderful things that were stitched, mostly during October while we were heavy into competing.  KLT vs Jodyri was at it again and between work and pulling my butt out of that intense ennui, it came out pretty good!

In July I found I have 5 days off in a row (it won't happen again but there it was) so I packed my stuff and headed home to New Mexico where I am from originally and most of my family is still at today.  I visited my sister and her clan, my aunt and her clan and then drove up to the four corners and visited my other aunt and my sweet, sweet Grandma.  I took along my Ink Circles Tapestry to show off. 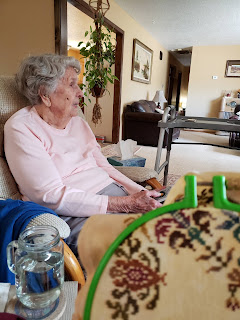 A little back story real quick:  After 9/11 happened I had a lovely visit with my Grandma and my Dad who came to see me in Eagle River, Alaska.  Grandma demanded I come to Whittier to stay for a few days so I did.  Before leaving, I wanted to show my Grandma (she is a master quilter) that I had learned how to quilt.  I had a lovely topper finished with garden veggies and fun colors and she LOVED it.  She then thanked me for it and I didn't have heart to tell her it wasn't a gift.  She's so adorable how could I say no to her?

Fast forward to July of this year and I bring Tapestry to work on while we chat and catch up and she says, "Oh I couldn't accept this as a gift, I'm too old for things now."  I giggled, remembering the topper she accepted years ago and gently told her it's for my BFF Dee Dee and Grandma looked a little bummed by that but glad at the same time.  She's still spicy after all these years.  She is 97.  I spent an extra day with them because I could and wanted to be with Grandma a little longer. So, Tapestry got some love and was touched by the hands of my Grandma.  I love that and it makes it even more special when that happens. 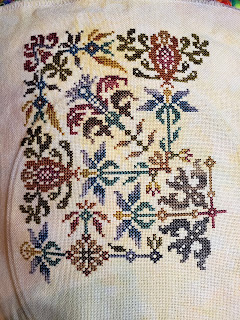 When the ho hums set in I still wanted to stitch a little at first but not on anything I had going on, so I grabbed one of the freebie butterfly patterns from World of Cross Stitching website and stitched up this little butterfly. 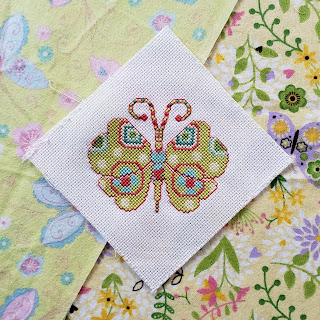 It will eventually be made into a little ornament and I think I'll put it with my Spring stuff to display around Easter.  It turned out so cute!

Fast forward again (the gap of no stitching was going on) and now it's time to start the Halloween SAL, but I'm just not into it.  I am one of the admins of the FB group Carla and Leonore's Halloween SAL, but all I could bring myself to do was go in, make announcements, give love to posts and leave.  It was a struggle as you know from yesterdays post, but I did manage to start Durene Jones Haunting Night.  I finished most of the outer border during the competition in October. 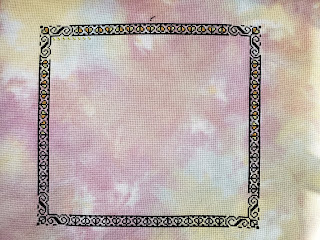 It is a fun pattern and I'll get around to finishing it next year.  I now have three Halloween patterns to finish, but I'm betting next year I'll have these done no problem.

During the October competition, which started out slowly like it does, I had time to finish some odds and ends.  The Spring Mystery SAL was finished and it's so pretty. 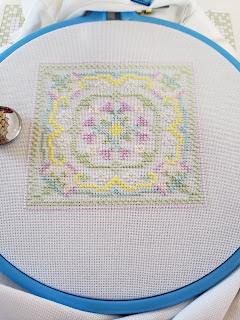 There's a backside I'll get to eventually but this part is complete.  Then I moved on to the half finished #TeamJodyri large version and finished that. 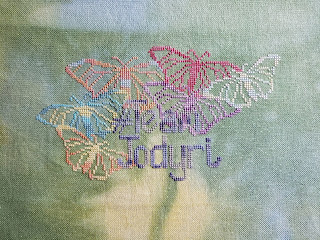 Yes, I should have put that pinkie color by the letters, but I didn't and this is how it is, ha, ha.  I also finished the October version of #TeamJodyri and I have to say I Love the cat! 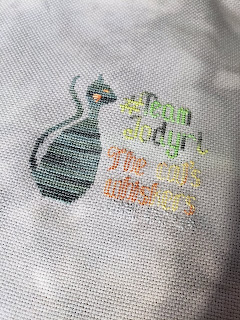 That grey at the bottom is just the month and year and my initials for me in case I forget when this happened and it blends so nicely with the fabric it's annoying.  But, it's done and I'm not changing it.  I might make an ornament out of this one too so it's been put in the "to sew" basket.

We were challenged to stitch on a penguin pattern.  I have never stitched a penguin pattern in my life and I've been stitching for over 30 years!  So I found a little freebie on Pinterest and stitched it up.  It's going to be an ornament for my sister since I was yakking on the phone with her while I stitched it. 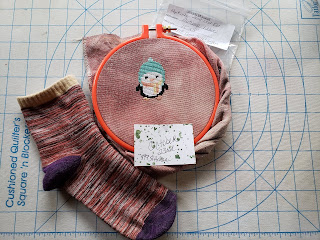 To explain the picture:  The challenge was to post a picture of the penguin, how many stitches and with a sock.  Funny right?  If you aren't part of this challenge you might want to be just for the pure fun of it.  The October Challenge was full of socks:  show us what socks you are wearing, put a sock in the picture, etc.

We were also introduced to Circus Stitches.  The designer is the sister of either KLT or Jodyri, I can't remember which, but I did find a pattern that I LOVE and snatched it up, picked out fabric and floss and was so pleased with it because I was able to use this one pattern for several daily challenges throughout the month. 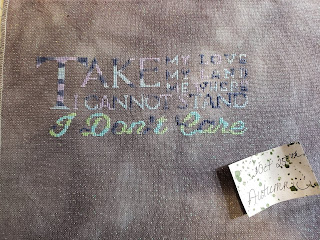 The fabric is more purple and the floss colors stand out more in normal light, this picture is just terrible but that's what I have at the moment.  I LOVE this pattern....I'm a Firefly fan (brown coats for life!) and to be able to do so much stitching on this one pattern during the month was a treat.  I might hold on to it for March's competition.  It's the only unfinished thing I have from the competition because I kind of refused to do a new start.  I have too many WIPs and didn't want yet another one, with the exception of this one.

After the competition ended, of course it was November and time to start stitching Christmas ornaments.  I started out with a pile of patterns that I wanted to stitch and ended up doing one leaflet.  Homespun Elegance "Santas Aplenty", but I decided to stitch three versions of each pattern. 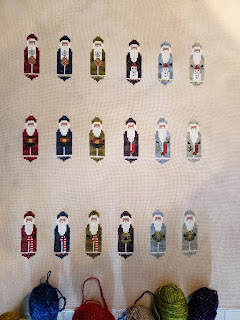 They don't look like Santas, but more like Wise Men.  but they all came out super cute.  I'm on a time crunch with these guys and since I'm only sending out five ornaments, once I figure out how to make them perfectly, I'll be done with them for this year.  More on that tomorrow.

I've still been using the cute little jar for my ORT jar.  It's good for one project at a time.  Not like my old one that broke which could handle a year's worth of orts. 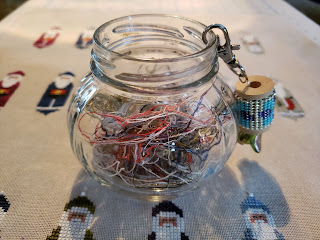 As you can see, the ornament project has almost filled this jar!  It's so darned cute!  I am keeping it.  It fits nicely in the glass thing I use to keep all of the stitchy stuff together so why not?

Not too bad for working on things so slowly.  Today started out rainy but it's snowing.  Winter came early this year and I'm thinking it will be a long one for sure.  Never fear, I will be warm and dry here in my 5th Wheel with plenty of things to stitch, knit and crochet.

Until next time.....KEEP ON STITCHIN'!