...Christmas ornaments.  I made enough for my siblings and my Secret Santa and one for me but I can't bring myself to make any more.  I have a stack of Santa ornaments to make for next year.  Here's hoping I'm up for the task next November!

I sent a rather large box to my brother who lives on his boat in Point Baker, Alaska.  I did have two boxes, but had to combine those with the larger box so he could have a little tree on his boat this year.  Here's hoping it arrives on time.  The weather is not cooperating and the float planes don't fly in nasty weather.  A fun fact for you:  Much of what you see on the NatGeo show "Port Protection" is actually filmed in Point Baker.  "Sam" and "Stewart" live there.  Everyone else lives in Port Protection, which is about 3 miles by boat from Point Baker.  If you watch the show, please enjoy it for the scenery and take what you are being told with a grain of salt...and maybe a beer...the BS gets deep on some episodes. 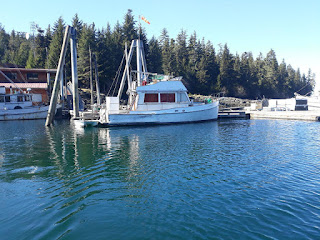 My other brother gets a package too, but that is a book and two ornaments so his boys can hang their first ornaments on the tree.

While I was taking the large box, package and smaller package to the car, I lost the one for my sister and still haven't found it.  Where it went I have no idea.  It was there.  It was gone.  I'm going to keep looking around for it since I know it made it out of the RV.  I think I know.  Maybe it fell off again on the way out the door.  Now I have to look again.

More looking has revealed no sign of that small package.  I'm wondering if the wind blew it away?  Hopefully when I clean up this mess I may find it.  Cross your fingers!  It will be a bummer if I can't locate it.

Now that the ornaments situation has resolved itself, I grabbed up my Thordak (pattern by UXS called Fire and Ember) and plan on finishing that.  Since today is the 13th I still might be able to finish this by the New Year, but I'm going to be realistic and say sometime in January. 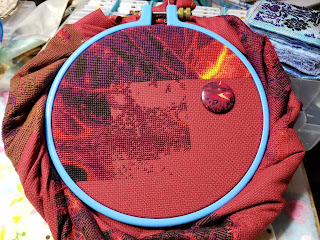 I have to be done with this by the beginning of January so I can work on, complete, frame and send Blue Mermaid to my brother for his birthday on March 3rd.  He is even changing the name of his boat to Blue Mermaid once he has the finished piece. 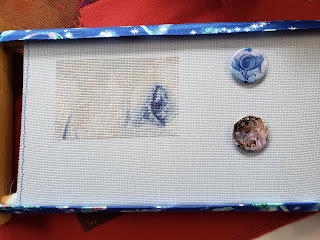 Another UXS pattern originally called Cute Angel Mermaid.  The lighting for that picture does not do it justice and hopefully I can snap a better shot before framing and mailing.

I hope you and yours are warm and safe and surrounded by love.